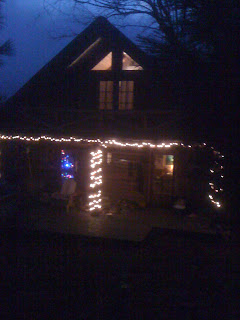 I hope everyone had a wonderful Thanksgiving we put up or decorations, played in the snow and cross country skied today. 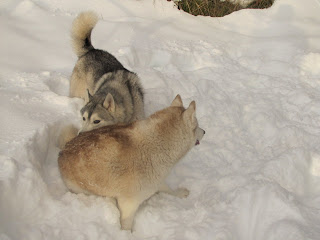 For your holiday shopping pleasure, the Green Springs Elves have been busy in the workshop creating lots of new soaps, individual bath scrubs and more! 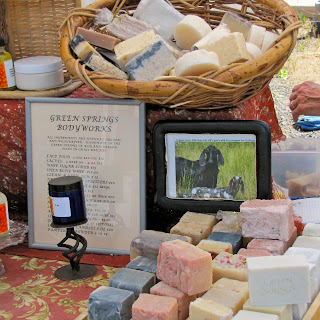 As as thank you to all my wonderful customers I am having a sale at www.greensprings0.etsy.com : ♥GREEN SPRINGS BLACK FRIDAY THROUGH CYBER MONDAY SALE♥ Free local delivery with  shipping refunded via paypal.
~ Nov. 26th through Midnight PST on Nov. 29th~
20 % off entire store and a free gift with every purchase. Use coupon code: GREEN4THEPLANETANDU at checkout.

Combined flat-rate shipping on up to 7 soaps is only $4.75 within the US, $11 for Canada and Mexico, and $13 for everywhere else. Shipping overages over $1.00 refunded.
Posted by GREEN SPRINGS BODYWORKS at 5:53 PM 1 comment:

THE HEART OF THE COMMUNITY 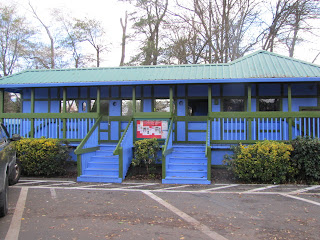 Located along beautiful Ashland Creek the Ashland Recycling is truly the heart of the community.  Even though most residents (not us we live in the mountains) now have curbside recycling it’s still a happening spot.  Tim Church pictured below has worked here for the past 20 years.  On many occasions he has greeted me at my car and helped me unload my recycling.  Thanks Tim! Tim is also an excellent musician and plays at many different venues.  Tim also saves bubble wrap and packaging peanuts in the building to the left.    Thanks Tim you have saved me lots of $$$$!
Tim brings dogs from the animal shelter to work with him and my husband and I enjoy visiting with them.  Below is an article from the Mail Tribune. 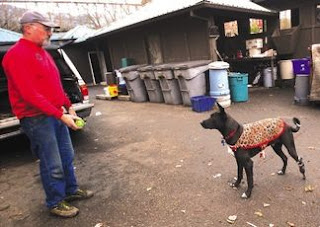 ASHLAND — Christmas came early for Jaxon, a rescued three-legged canine waiting for a prosthetic limb since September.
After weeks of measurements, castings and temporary prosthetics, Jaxon's new leg was shipped just after Thanksgiving by Denver-based Orthopets, which specializes in pet orthotics.
And he's been running on all fours ever since.
The 1-year-old black Labrador-Great Dane mix was rescued from the Jackson County animal shelter in August by Tim Church, an employee at the Ashland Recycling Center, and his wife, Lucinda. Church has helped find homes for more than 200 animals since 1992 by fostering them at the center. Church decided to adopt Jaxon himself and help the dog get a new leg.
Tim: As far as recycling, it's a good thing to do. It's hard to change the world, but if you work on your little corner of it, doing what you can, it all adds up. My wife and I are volunteers at the animal shelter, and members of FOTAS (Friends of the Animal Shelter). We have fostered and found homes for around two hundred dogs, and a few cats, in the past 15 years. We've recently stopped fostering, but I still take an adoptable dog from the Jackson County Animal Shelter to the recycling center almost every week. Dogs are good people. But please folks, get your pets spayed and neutered. The statistics say that one unspayed female dog and her offspring can produce 67,000 dogs in six years!
Tim: We've had Huggy Bear for about eight years. I brought him from the shelter in the hopes he would get adopted. He was adopted one day and brought back the next because he was such a pain in the ass. So my wife and I adopted him. He was still a pain in the ass, but has mellowed over the years. His name is Huggy Bear because when we adopted him he looked like a bear and would stand on his hind legs and hug us.
Also located here is the world famous Ashland Free Box.  Here you can see homeless people along side socialites digging for treasures.   Because of Tim and some faithful volunteers this operation runs smoothly.  You will rarely find tattered or stained clothes.  I often find cashmere sweaters and new looking clothes for my five grandkids. 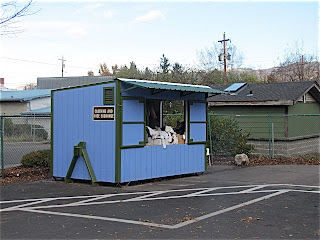 Tim had this to say in an interview in 2007: I enjoy the freebox dynamics. It's actually kind of famous. I often hear comments like, "We're on our way from L.A. to Seattle, and had to stop and check out this awesome freebox we've heard about!" All kinds of people utilize the freebox: mothers and kids, homeless people, grandparents, people who drive expensive cars . 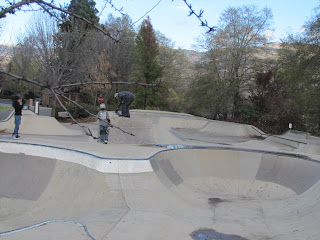 Right next door is the awesome state of the art Ashland Skate Park.  What a great idea to locate it here because there are always adults nearby to supervise.  I love to sit and watch the skaters especially Keenan my 11 year old grandson. 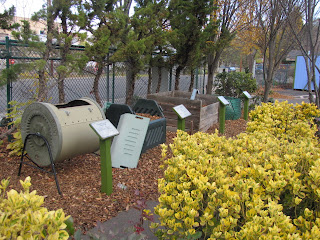 Next we have the Backyard Compost Demonstration.  It is here that I learned all about composting 20 years ago.  I still have the free worm bin I was given when I completed the class. 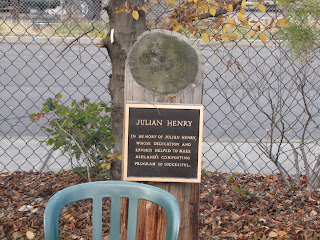 This plaque is in memory of the man who started it all:  Julian Henry was instrumental in setting up this center.  Unfortunately he died in his 30s and never got to see what a success it became.  Many days you will see a vase of fresh flowers on the chair below.
If you ever get to Ashland be sure to check it out.  It’s located at Water Street and Van Ness.

Posted by GREEN SPRINGS BODYWORKS at 7:56 AM No comments: 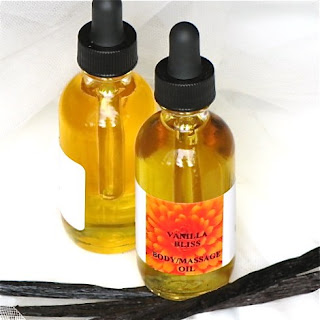 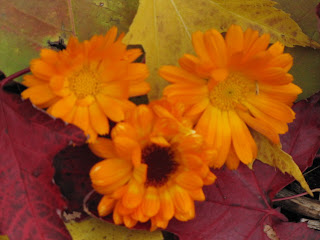 Sorry I haven't posted in a while.  Fall is my busiest time of the year.  Since I make most of my holiday gifts I need to get started early.  I have also been making new products for my Etsy Shop. After wild crafting herbs and flowers in the fall they are now solar infusing nicely on my windowsills. Besides the multi-herb oil pictured in the previous post, I have also infused the vanilla oil pictured.
The beautiful calendula was picked yesterday in the garden.  It's unusual for it to still be blooming in November so I am really thankful.  Calendula is an amazing herb.  It is especially good for babies because of it is so gentle and healing.  Some of the other infusions I am making are comfrey, arnica, St. John's Wort, and elderflower.  For holiday gifts I am infusing  rosemary, thyme, fennel, and tarragon in organic olive oil.
I like the slower solar infused method, only using dried herbs and add Vit E oil to prevent rancidity and to increase shelf life. If stored away from heat and light, your oil should last a year or two if not longer.This is how I do it: 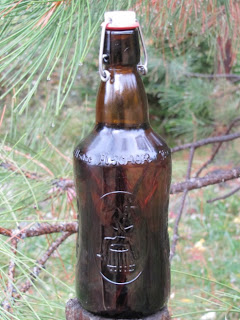 Dry the herbs to remove all water.  This can be done with a food dehydrator or just by leaving in the sun.  After the flowers and herbs are dry, you can add them to the olive oil.  Whole sprigs of thyme, rosemary, dried peppers, etc. can decorate the inside of the bottle this way.
The oil will pick up the flavor fairly quickly, in the first few weeks, and then slowly intensify. It is fine to leave the herbs in for a long time; eventually all the flavor leaves the herbs and the oil flavor stabilizes. I like to infuse the herbs in the decorative beer bottles pictured when giving as gifts. For the herbal infused olive oils I like to attach a recipe to the bottle.  For the infused massage oils like vanilla, comfrey, calendula, St. John's wort, arnica I sometimes like to essential oils known for healing or relaxation.

Happy Holidays and don't forget to visit my Etsy Store for my big Black Friday Sale.
Posted by GREEN SPRINGS BODYWORKS at 9:36 AM No comments: